In the summer of 1998 Mary Jane Ehlich and Madalene Murphy put their heads together and began talking about the possibility of a quilt guild in Tioga County. Mary Jane, an award-winning quilter, had been quilting just about all her life and had recently retired and returned to her family home in Covington. Quilt guilds had been an important part of her quilting, and she had been active in a number of large guilds, primarily in North Carolina.
A few years before, Madalene, who lived in Wellsboro, had decided to get serious about her quilting after falling in love with it in the late seventies. She had joined the Corning Quilt Guild in 1996 and realized how much stimulation, encouragement, and shared knowledge a guild provides.
Both Mary Jane and Madalene were hoping for a guild closer to home.
They chose the date September 28, 1998, for an organizational meeting at the Gmeiner Art & Cultural Center in Wellsboro, and Madalene wrote an article about the meeting for the Wellsboro Gazette. They decided that, if at least ten people showed up, they would move forward with their plans. Much to their surprise, twenty-six other women attended the meeting that night, who were not only interested in quilting but willing to volunteer to help out. And so the Mountain Laurel Quilt Guild, a name suggested by Mary Jane, was born.
During the first year the nature of the guild took shape. Monthly meetings took on a three-part structure: a business meeting, a show & tell of finished projects or works in progress, and a program presented by a professional from outside the guild or a guild member.
Each of the volunteers who took on jobs at that first meeting contributed much to the success and increasing popularity of the guild:
These and subsequent officers who took over these positions have made the guild what it is today and the guild owes each of them a debt of gratitude.
List of Presidents:

Meetings are held on the third Monday of every month April - October 7:00 PM, November - March 1:00 PM. At the Gmeiner Art and Cultural Center located at 134 Main Street in Wellsboro, Pennsylvania 16901. Visitors welcome!

If you are looking for the Mountain Laurel Quilt Guild in Boone, NC, click here. 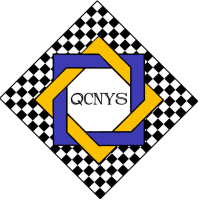